How to pay in the Nordic countries

Can you pay with the euro in Scandinavian countries? Is it really that expensive there? These are just a few questions that come to mind when it comes to Nordic countries and money. In this article you can read all about paying in Sweden.

Paying in Scandinavian is mainly done with the payment card. It is rare that you have to pay with cash. You do not have to stand in line for an ATM as soon as you leave the plane. In many cases you can even pay for a visit to the toilet with the card. Most credit cards are accepted in the Nordic countris.

Before you travel, check with your bank whether your bank card (and your visa card) also work abroad. Cash money is always possible, but you have the chance that as soon as you go home you will be stuck with the foreign currency. Again: basically you don’t need any cash!

Many stores and entrepreneurs choose to be “kontantfri”. This means that they no longer accept cash payments but you can only pay with the card or via swish. They often do this because it is easier but also safer (no thefts, no / less money transports). Sweden is a leader in digital payment. They want to be a cashless society within a few years.

The Scandinavian countries do not participate in the euro. Nor do they currently have plans to join the euro, although they are actually obliged to do so by the Accession Treaty. However, you can see the price in euros in certain tourist spots. The Swedish currency is the Swedish krona (Krona), in Norway and Denmark they pay with the Norwegian and Danish krona. To convert the Swedish krona into euros, you can divide by ten and round up. You may round up depending on the exchange rate.

There are coins of 1, 2, 5 and 10 crowns. There are banknotes of 20, 50, 100, 500 and 1000 crowns. Just as with the euro, there is also a subdivision into hundredths. The Scandinavian people speak of öre instead of cents. These small coins were taken out of circulation.

In Sweden it is common for everyone to go get their own beer at the bar. The bill is also shared for a restaurant visit. To transfer money between themselves, they have a handy app: Swish. It is also immediately a verb: att swisha. Unfortunately, as a foreigner, you cannot use the app. You must link the app to your (Swedish) bank account. Even the smallest things can be easily and quickly settled with Swish.

Fewer and fewer Swedes carry cash and that is because of Swish. With the Swish app on your mobile phone you can easily transfer money to a mobile phone number instead of to an account number. Because instant payment has already been introduced in Sweden, the amount is credited almost immediately to the account linked to that mobile number. 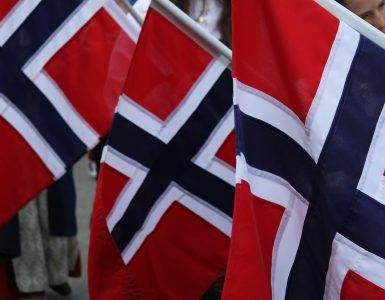 Whether it is the flag of Denmark, Finland or Sweden, a Scandinavian flag is immediately recognizable by its characteristic colors and the distinctive cross in the flag. But where exactly does this tradition come from...